This event will be hosted by the Global Studies Center (GSC) at Gulf University for Science and Technology (GUST). The workshop is dedicated to an issue that has global significance: how do we define the “classics” of world literature and how do we translate them across various languages and cultures? What problems does the translator face?

Much of the workshop will focus on problems encountered in the translation of the Qur’an – a project currently being undertaken by the renowned Islamic scholar Bruce Lawrence in collaboration with an expert in English, the poet and scholar M.A.R. Habib. These problems include not only the correct and accurate rendering of meaning but also issues of style, such as sound effects, meter, and various literary devices such as the use of metaphor and allegory. All of these elements are involved in the translation of the Divine Names or Asma ul Husna, which the workshop will examine closely in Surat al-Hashr. This workshop will take place over two days: on Sunday, 27 January, 2019, there will be a panel of two distinguished speakers, each talking about a different aspect of translation: Bruce Lawrence and miriam cooke. The following day, Monday, 28 January, there will be a series of three interactive sessions where the speakers discuss the translation of particular passages with participants in the audience. 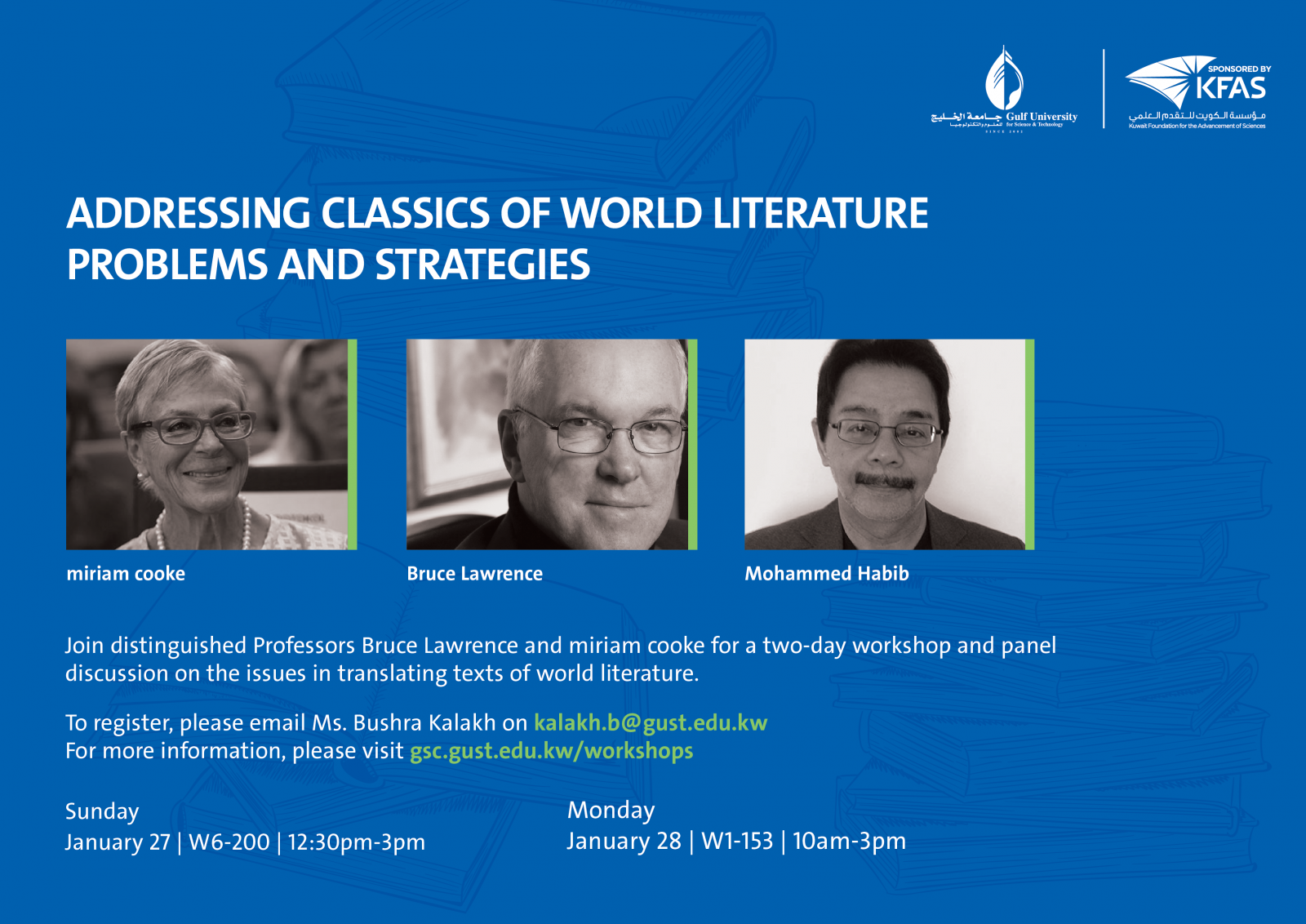 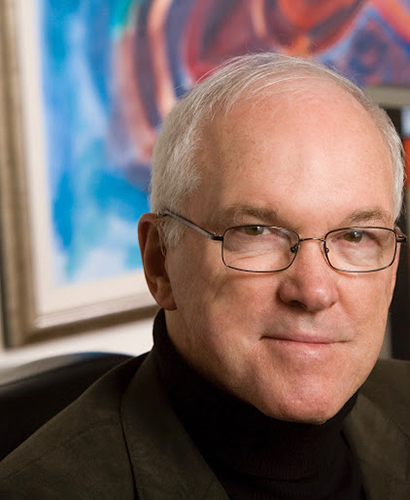 Professor Lawrence’s research interests include: Contemporary Islam as Religious Ideology; Islamic Cosmopolitanism; the Multiple Roles and Uses of the Qur’an. Among his recent books are: The Koran in English - A Biography (Princeton University Press, 2017), Who is Allah? (UNC/EUP Press, 2015), The Qur’an – a Biography (Grove/Atlantic, 2006); and Sufi Martyrs to Love (with Carl Ernst; Palgrave, 2002). He is also working with Professor Rafey Habib on a multi-year project, The Qu’ran – A Verse Translation, forthcoming from WW Norton in 2020.

His early publications explored the terrain of Muslim speculative thought (kalam) and also comparative religions, especially Islam and the Indic traditions. After the Iranian revolution, he engaged the notion of Islamic fundamentalism in a prize-winning book, Defenders of God (1989), and also undertook the translation into English of a Persian classic, Morals for the Heart (1992).

Professor Lawrence has won numerous scholarships, garnered academic awards (including one from the leading Turkish NGO on women: TURKADD in February 2012), and generated intense debates through his publications. 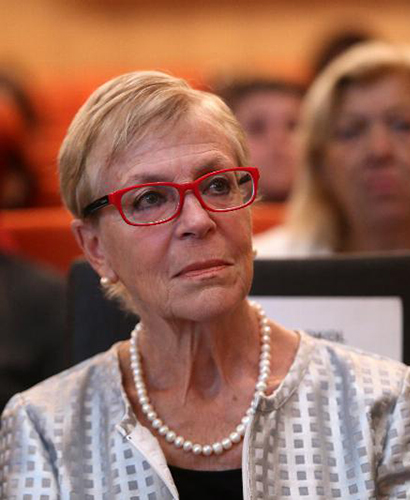 Professor Cooke has been a visiting professor in Tunisia, Romania, Indonesia, Qatar and Istanbul. She serves on several national and international advisory boards, including academic journals and institutions. Her writings have focused on the intersection of gender and war in modern Arabic literature, Arab women writers’ constructions of Islamic feminism, contemporary Syrian and Khaliji cultures, and global Muslim networks.

In addition to co-editing five volumes, she is the author of several monographs that include The Anatomy of an Egyptian Intellectual: Yahya Haqqi (1984); War’s Other Voices: Women Writers on the Lebanese Civil War (1987), Women and the War Story (1997); Women Claim Islam (2001); Dissident Syria: Making Oppositional Arts Official (2007), Nazira Zeineddine: A Pioneer of Islamic Feminism (2010), Tribal Modern: Branding New Nations in the Arab Gulf (2014) and Dancing in Damascus: Creativity, Resilience and the Syrian Revolution (2017). She has also published a novel, Hayati, My Life (2000). Several books and articles have been translated into Arabic, Chinese, Dutch and German. 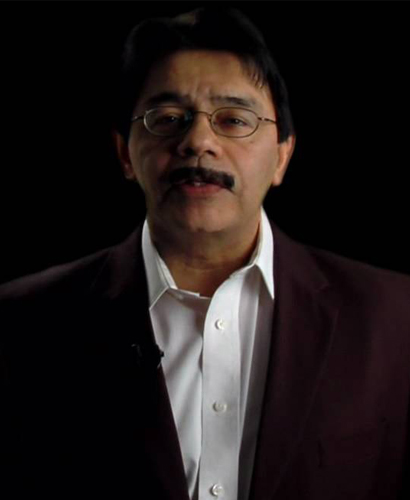 Professor Habib is a scholar in the areas of literary criticism, theory and philosophy. His publications include three histories of literary criticism, a study of T.S. Eliot’s philosophical background, and two translations of Urdu poetry. He has recently completed two books: Hegel and the Foundations of Literary Theory (Cambridge University Press, 2018) and Hegel and Empire: From Postcolonialism to Globalism (Palgrave MacMillan, 2017). His books are used in numerous institutions around the world.

His interests also extend to Islamic literature, as well as Post-Colonial studies and World literature. He has been contracted by Liveright Publishing Corporation (an imprint of W.W. Norton) to translate the Qur’an into English verse, in collaboration with the distinguished Islamic scholar Bruce Lawrence

Focus Topic: “Translating The Classics: Challenges For The Translator”

This would consist of three sessions where the workshop speakers would compare different translations of a given passage, and get important feedback from the workshop participants.

Professor Bruce Lawrence (Duke University, Emeritus Professor of Islamic Studies); his interests include: Contemporary Islam as Religious Ideology; Islamic Cosmopolitanism; the Multiple Roles and Uses of the Qur’an. Among his recent books are: The Koran in English - A Biography (Princeton University Press, 2017), Who is Allah? (UNC/EUP Press, 2015), The Qur’an – a Biography (Grove/Atlantic, 2006); and Sufi Martyrs to Love (with Carl Ernst; Palgrave, 2002).

Professor miriam cooke (Duke University, Emerita Professor of Arabic) will examine the notion of a “classic,” and then talk about the challenges of translating Arabic literature, focusing on al-Ghazali's al-Munqidh min al-Dalal (Deliverance from Error) and Taha Husayn's Al-Ayyam (The Days).

Professor M.A.R. Habib (Rutgers University/GUST, Professor) is a scholar and poet; he will address the stylistic challenges of translating the Qur’an into Englis Verse.

Main Topics to be Discussed:

If you would like to attend the workshop, please send an email to Ms. Bushra Kalakh at [email protected]

Please indicate which days and which sessions you would be interested in attending:

You are welcome to attend more than one session